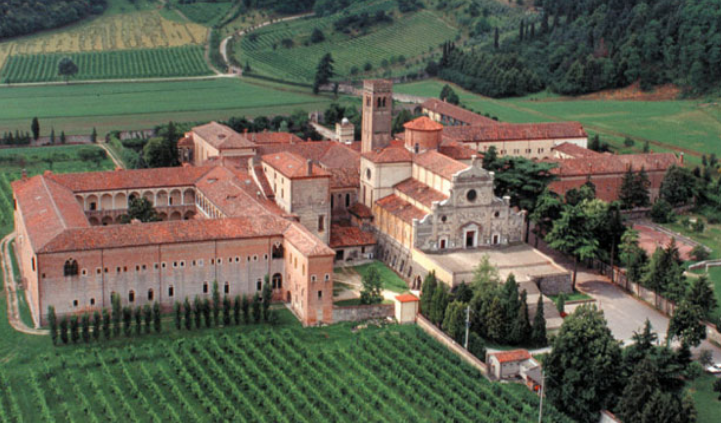 The Praglia Abbey is located at the foot of the Euganei hills about 12 kilometers from. The Abbey, founded in the years between the eleventh and twelfth centuries, it remained until 1304 a dependency of the Abbey of St. Benedict in Polirone of Mantua. Only with the beginning of the fourteenth century, the community of Praglia, consolidated and taken root more firmly in the environment Padua, became fully autonomous electing an Abbot caught between its monks.
The Abbey was thriving in the following centuries, until the Napoleonic suppression of 1810. In 1834, with the support of the Austrian government, the monks returned to the monastery. On June 4, 1867 was applied in the Veneto the law which suppressed again all the religious corporations. So the community was dissolved a second time. Most monks went to the monastery of Daila (Croatia), then in Austria. Only two or three monks remained in Praglia as custodians of the monastery.
The April 26, 1904 two monks returned to the monastery, and on 23 October was able to resume full regular life that continues to this day.

The memory of a special interest of the monks of Praglia to vineyards and wine is kept in the ancient records of nearly a thousand years, and even today is the root of a quality product, which at the same time tells a story of life.
In the cellar you can breathe this story, where the ancient art of doing things meets with requirements and new techniques, in constant search of valuable results.
In abbey monks cultivate about 10 hectares of vineyards entirely designation of origin, where there are the traditional varieties of Garganega, the Friularo, and moscato Fiordarancio, next to some best-known varieties.