The American Association of Wine Economists (AAWE) held its 9th Annual Conference from May 26-30, 2015 in Mendoza, Argentina

Hosted by the National University of Cuyo, Mendoza.

The first specimens of Vitis vinifera were introduced in Argentina by Spanish colonists in the 16th century. The soil and weather conditions favored the growth of the Vitis vinifera, especially in regions in the vicinity of the Andes. Rudimentary winemaking methods were used at the time. During the 19th century European immigrants introduced new vinegrowing techniques and grape varieties. The railway extended across the country and the first Quinta Normal de Agricultura (School of Agriculture) was created in Argentina. The wine industry expanded nationwide.
The 20th century brought the modernization of the Wine Industry New technology was incorporated. New winemaking and management techniques were introduced. Foreign investments increased and were complemented by a search for new markets. Argentine wines started to be exported across the world.
Today Argentina is he 8th world’s largest wine producer and exporter. You will find more than 1300 wineries with an entire acreage of more than 500.000 acres.

Altitude:
The vineyards are located on plains between 0.2 and 2%, at altitudes that range between 980 and 9840 feet above sea level.

As the ‘high valleys’ are far from the oceans, Argentina is one of the few continental winemaking areas in the world, with wide temperature ranges. An explosion of autumnal life, during which grapes ripen under the warm embrace of the sun and the dark sparkles of the cold nights, giving birth to a wealth of aro has and flavors.

Due to the vast expanse of its territory, Argentina offers the possibility of cultivating quality vineyards across larger areas than other countries. The country’s altitude and latitude, the presence of the Andes Mountains, the rainfall regime and the variability in soils are also of paramount importance to vineyard quality. As a result, the products of our land are shaped by the extreme forces and special features that make us unique.

The simple complexity of our soils, with low organic matter content, leads to restricted vine growth. This arid fruitfulness favors the natural development of premium grapes with genuinely distinctive flavors.

The intense quietness of the climate contributes to the production of naturally organic wines. The low humidity allows growers to maintain vineyard health almost naturally, with almost no fitosanitary treatment.

Mendoza is a province of Cuyo is the name given to the wine-producing, mountainous area of central-west Argentina. Historically it comprised the provinces of San Juan, San Luis and Mendoza. It is an arid yet fertile region whose name means “country of deserts” in the Huarpe milkayac dialect.Cuyo is the most prolific grape growing region in Argentina. Not only is Cuyo the largest and most prolific wine region in Argentina but also in South America. Cuyo has 482,384 cultivated acres, which represent 95.62 % of the country. 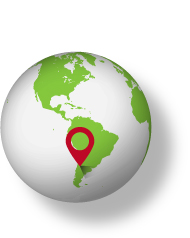